This article is published in the 2019 edition of the Reporter, Q2 and is available as a CME course.

Workplace violence has been defined by the National Institute for Occupational Safety and Health as “violent acts, including physical assaults and threats of assault, directed at persons at work or on duty.”1

According to the U.S. Department of Labor, all workers have a right to working conditions that do not pose a risk of serious harm. 2 Unfortunately, violence in the health care industry appears to be more severe than in other industries. Health care workers are four times more likely to take time off to recuperate from workplace violence than employees in other industries. 3

This article outlines the incidence of workplace violence in the health care setting; offers steps to prevent it; describes de-escalation strategies to use if confronted by agitated patients or family members; and lists “next steps” to take in the aftermath of workplace violence.

While injuries caused by patients are mostly accidental, intentional harm toward health care professionals is also a reality. Examples of assaultive conduct include:

According to the Bureau of Labor Statistics and National Crime Victimization Survey, there were approximately 24,000 workplace assaults annually between 2011 and 2013, and almost 75 percent of them occurred in health care and social service settings.4

Physicians experience verbal and physical assault, as well. According to a 2014 physician poll, 71 percent of responding physicians reported being verbally or physically assaulted at some point in their career. 6

Read the entire article and reference sources in the Reporter, Q2 2019, pages 2-11. Upon completion of the article and CME course, physicians will be able to: 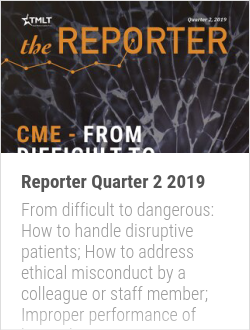