A 50-year-old woman consulted with a bariatric surgeon for weight reduction surgery. The patient was 5’ 4” and weighed 265 pounds. The patient had a history of gastroesophageal reflux disease and shortness of breath related to obesity.

The first postoperative appointment was rescheduled due to the patient reporting that she vomited after eating soup. At the rescheduled appointment, on May 24, the bariatric surgeon documented the patient was taking multi-vitamins as instructed. Nutrition counseling to help the patient manage her weight was discussed, but not scheduled.

On June 7, the patient called the bariatric surgeon’s office to report that she had been vomiting for the last 3-4 days. The patient was instructed to go to her local emergency department (ED), but the patient declined. She was taking anti-nausea medication and wanted to see if her nausea would resolve on its own.

The next day, June 8, the patient went to the ED due to continued nausea and vomiting. The attending physician documented her impression as pancreatitis following review of a normal CT scan and normal bowel sounds. The patient was admitted to the hospital, and the bariatric surgeon was notified.

The patient was placed on NPO and scheduled for an ultrasound to rule out gallstones or dilated common bile duct. The attending physician consulted with Gastroenterologist A, who confirmed the pancreatitis diagnosis and placed the patient on a liquid diet.

On June 13, while still in the hospital, the patient had uncontrollable nausea and vomiting. Gastroenterologist B, covering for Gastroenterologist A, noted the patient as “not tolerating oral intake.” He recommended hydration and alternate means of nutrition be considered, including nasogastric (NG) tube feeding or total parenteral nutrition. A CT scan was reviewed and the results were normal. An abdominal ultrasound found gallbladder sludge; however, no gallstones were found. Biliary dilation was not indicated.

A general surgery consult was obtained, and laparoscopic cholecystectomy was scheduled to improve the patient’s condition and resolve the pancreatitis. The general surgeon documented that if symptoms did not improve postoperatively, then enteral nutrition with NG tube placement should be considered.

On June 15, the patient was taken to surgery and a laparoscopic cholecystectomy was performed. Her symptoms did not improve after the surgery. The nurses noted that the patient only consumed 10% of her meals and less than 30 ounces of fluid.

On June 24, the patient was discharged. On the day of discharge, the nurses noted that the patient did not eat her breakfast or lunch. The patient’s family questioned the discharge order and requested an evaluation of the patient. She seemed confused and had crossed eyes. After waiting three hours without a physician visit, the family took the patient home.

Several hours later, the patient was taken back to the hospital by EMS. She had an altered level of consciousness, unsteady gait, lethargy, and a closed right eye. The ED physician evaluated the patient and documented that she could not walk; was lethargic and disoriented; and had a “flat affect.” The patient was admitted and CT scan of the brain and neurology consult was ordered.

The patient was diagnosed with Wernicke’s encephalopathy. On July 1, she was transferred to a neurological rehabilitation center for post-acute brain injury rehabilitation. Three months later, a neuropsychological evaluation of the patient found:

The patient’s condition only slightly improved over time.

A lawsuit was filed against Gastroenterologists A and B, the General Surgeon, and the hospital. Allegations were:

Consultants for TMLT were critical of the care provided to the patient. All of the consultants felt that vitamin replacement and determining thiamine levels were mandatory steps for this patient. They all felt that the physicians and hospital should have recognized the potential for Wernicke’s encephalopathy, as it is a well-known complication of bariatric surgery.

A general surgeon consultant pointed out Wernicke’s encephalopathy can develop quickly, especially if there is a pre-existing thiamine deficiency.

This consultant was critical of the general surgeon for discharging the patient after the laparoscopic cholecystectomy, as the patient’s oral intake was inadequate and neurologic symptoms were present. The hospital was also criticized for not responding to the family’s request for a physician to examine the patient before discharge.

Experts for the plaintiff stated that the general surgeon violated the standard of care by failing to ensure the patient received appropriate nutritional support. Additionally, the patient required adequate fluid and nutritional intake before being discharged. Another consultant criticized the hospital for failing to have policies in place that would trigger a nutritional consult after the patient had been NPO for a week on clear liquids.

Gastroenterologist consultants were critical of Gastroenterologist B and the general surgeon for failing to order nutritional supplementation. Instead, both physicians documented their recommendations for nutritional supplementation, but they did not order it. This consultant felt it was a violation of the standard of care for failing to act on these recommendations.

This case was settled on behalf of Gastroenterologists A and B and the General Surgeon. The outcome of the case against the hospital is unknown.

Persistent vomiting is a symptom that should be followed. When this symptom is present, Wernicke’s encephalopathy can develop between three to 72 weeks postoperatively.1

It can take several days to obtain results of a thiamine level test. Therefore, it may be important to start a patient at risk for Wernicke’s encephalopathy on thiamine as soon as possible, even with a presumptive diagnosis. Definitive diagnosis can be made by a patient’s improved condition with treatment or when test levels are received.1

Bariatric surgery patients and their families should be educated on Wernicke’s encephalopathy, and what symptoms to look for postoperatively. They should also be educated on the importance of nutrition both pre- and post-surgery, as postoperative nutritional deficiencies can be life threatening.

In this case, two of the physicians documented the possibility of nutritional deficiency with the patient, but they did not act. Physicians who order tests have the responsibility to review the results, discuss the findings with the patients, and treat appropriately.

Allegations of failure to act may be countered if the treating physician fully documents her or his reasoning. For example, if documentation existed that noted the patient had objected to treatment, the physician’s lack of action may have been easier to understand and defend.

Wayne Wenske is Senior Marketing Coordinator at Texas Medical Liability Trust. He can be reached at wayne-wenske@tmlt.org. 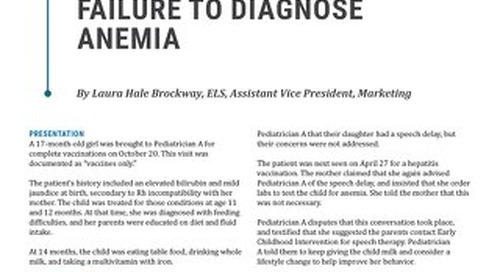 Failure to diagnose anemia; Law requires Texas physicians to query PMP before prescribing opioids and other...

A 33-year-old woman came to the emergency department (ED) complaining of bilateral abdominal pain, back pai...